Have you ever heard green burial also known as biodegradable burial pod? It is now possible with the help of science, says report.

This biodegradable burial pods let your body becoming a tree, presenting Capsula Mundi, an egg-shaped pod through which a buried corpse or ashes can provide nutrients to a tree planted above it.

According to CNN report, Capsula Mundi is an egg-shaped pod through which a buried corpse or ashes can provide nutrients to a tree planted above it. 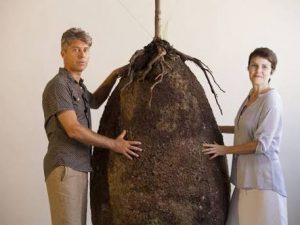 The latest discovery definitely poised a truth that carbon footprint will not end in the grave after death.

While you rest in peace, the wood, the synthetic cushioning and the metals generally used in traditional coffins — as well as the concrete around reinforced graves — continue to litter the earth.

“A lot of energy also goes into producing these materials, which are used for a very short time and then buried. They’re not going to break down very fast,” says Jennifer DeBruyen, an Associate Professor of Biosystems Engineering and Soil Science at the University of Tennessee. 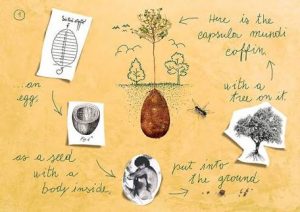 The biodegradable burial was separheaded by the Italian designers named Raoul Bretzel and Anna Citelli might have a solution.

They call it Capsula Mundi — “world’s capsule” in Latin — and it’s an egg-shaped, organic casket that’s suitable for ashes, too.

Bretzel and Citelli said, once buried, the biodegradable plastic shell breaks down and the remains provide nutrients to a sapling planted right above it.

They both believe that death is as closely related to consumerism as life, so they set a goal and it is -to create cemeteries full of trees rather than tombstones, reduce waste, and create new life out of death.

Report suggested that in 2003, when the idea for the Capsula Mundi came, when the pair saw tons of furniture trashed at the end of Milan’s famous design fair, “Salone del Mobile.”

“It was a big competition to design new things, but almost nobody cared about future impact or whether anyone would actually use these things”, Bretzel said. 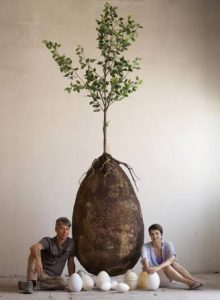 “We started thinking about projects that could have an environmental aspect. Death is part of our life but at design fairs nobody cares about that because it’s one side of our life that we don’t want to look at. We don’t like to think of death as part of life,” she added.

The designers are launching the first version of their product, which is for ashes only. A later model will be suitable for bodies, to be encapsulated in the fetal position.

Bacteria in the soil first break down the bio-plastic, then the ashes gradually come into contact with the soil, without changing its chemical balance too dramatically. While the burial of ashes may be environmentally friendly, cremation has its critics:

On top of that, older dental fillings can release polluting mercury, which is why some crematoriums have installed mercury filters.

Even after death, we need to share our contribution to the mother Earth because polluted environments kill 1.7 million children each year, World Health Organization says.

Nimble Robots can assist 80% of Prostate Surgeries in US

Elon Musk plans to implant an AI interface in your brain

New male contraceptive not only prevents birth, but totally reverse it

johnMarch 24, 2017
Read More
Scroll for more
Tap
China plans to connect regions by its 400kph bullet train
We use cookies to ensure that we give you the best experience on our website. If you continue to use this site we will assume that you are happy with it.OkPrivacy policy