We’ve already featured some of the brilliant inventions that were develop to laid solutions to present problems, and now, another scientific invention ablazing online.

Hong Kong-based students developed a door handle that kills 99.9% germs, the handle was powered by a microbe-killing.

Diseases that brought by germs are spreading in many ways.

Due to it, an infected person can cough or sneeze on someone nearby. Or else, they can transfer germs through a handshake. But sometimes we pick up germs indirectly.

Based on the germs’ movement, a sick person has a great possibility to leave behind bacteria or viruses when they touch a doorknob, handrail, shopping cart handle or countertop etc.

To address this eminent problem, two teens from Hong Kong asked themselves the same question. Now they’ve come up with a door handle that can “knock out” germs on contact. 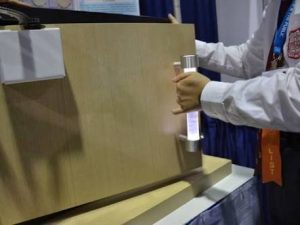 Talking with the invention, the glow from this door handle activates a microbe-killing coating. That could help reduce the transmission of diseases from germy hands.

According to Science News for Students’ report, the door handle that kills germs’ concept is simple, its says the movement creates power that triggers a germ-killing reaction on the handle.

Based on the lab tests, their system killed about 99.8 percent of the germs that they spread onto lab dishes coated with their material.

Speaking at the Church of Christ in China Tam Lee Lai Fun Memorial Secondary School in Tuen Mun, Wong noted that some research by others has shown that door handles in public areas often host lots of bacteria and viruses.

These reality backs up his and Li’s goal to design a coating for door handles that would be hostile to germs.

After doing some research, researchers learned that a mineral called titanium dioxide is known to kill bacteria. It’s already used for other purposes in many products, from paints to sunscreens to edible puddings.

Also, to make their coating, the teens ground the mineral into a very fine powder.

Titanium dioxide kills bacteria best when lit by ultraviolet (UV) light, says Simon. UV wavelengths are among those in sunlight. But indoor handles and any used at night would have little natural exposure to UV light.

The teen researchers made their some lighting to the door handle from within. Now, every part of the coated handle will see UV light.

To make sure the interior light reaches the coated surface, the teens fashioned their door handle from a long cylinder of clear glass. Each end fits into a bracket.

Inside one of the brackets is a strong light-emitting diode (LED). It emits UV light. (Transmitting the light from one end of the handle to the other is similar to the transmission of light through a fiber-optic cable. In this case, though, the glass handle is fat rather than super-thin.)

You know what? The nifty part of the invention is: The power that makes the UV light shine comes from opening and closing the door.

The two young researchers also designed a small gearbox that attaches to the door. Equipment inside the box converts the motion of those gears into electrical power. That power is then carried by wire to the light-emitting diode inside the door handle.

The teens presented details of their research here at the Intel International Science and Engineering Fair.

The huge event was created by the Society for Science and the Public (which also publishes Science News for Students).

Furthermore, the annual competition is sponsored by Intel. This year, it brought 1,702 finalists to Pittsburgh in mid-May from more than 70 countries.

The door handle system, according to the proponent, might cost no more than about $13 to build.

johnJune 7, 2017
Read More
Scroll for more
Tap
This ‘self-healing’ asphalt is the new transport revolution
This 3D-printed ovaries allow infertile mice to give birth
We use cookies to ensure that we give you the best experience on our website. If you continue to use this site we will assume that you are happy with it.OkPrivacy policy