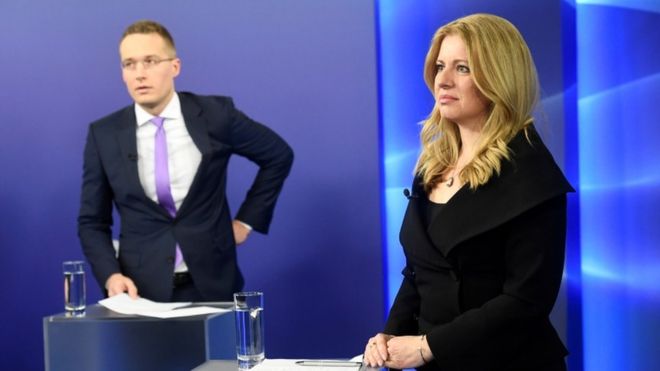 Slovakia is set to vote for a new country leader, with front runner, Zuzana Caputova.

The two candidates got the most votes in the first round a fortnight ago, but failed to gain the 50% needed to win.

If elected, Caputova, a lawyer and anti-corruption activist with almost no political experience, will be the first female Slovak president.

The election follows the murder of an investigative journalist last year.

Jan Kuciak was looking into links between politicians and organised crime when he was shot alongside his fiancée in February 2018.

She cites Kuciak’s death as her motivation for getting into politics and has led a campaign focusing on anti-corruption.

She gained prominence as a lawyer, when she led a case against an illegal landfill lasting 14 years.

Aged 45, a divorcee and mother of two, she is a member of the liberal Progressive Slovakia party, which has no seats in parliament.

In a country where same-sex marriage and adoption is not yet legal, her liberal views promote LGBTQ+ rights.

Her lack of experience places her in stark contrast with her opponent, Mr Secovic, who is a diplomat and vice president of the European Commission.

In the first voting round, Ms Caputova won 40% of the vote, with Mr Sefcovic gaining less than 19%.

She is leading by a wide margin in opinion polls.

John JosephMarch 30, 2019
Read More
Scroll for more
Tap
MPs reject May’s EU withdrawal plan for the third time
Red Cross to begin distribution of crucial aid in Venezuela
We use cookies to ensure that we give you the best experience on our website. If you continue to use this site we will assume that you are happy with it.OkPrivacy policy