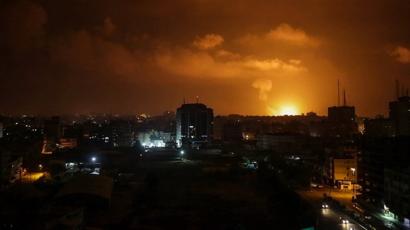 Israel has carried out dozens of air strikes on Palestinian militant sites in Gaza in retaliation for the firing of two rockets towards Tel Aviv, local army said.

The rocket fire, which did not cause damage or injuries, was the first to target the Israeli city since 2014.

AS of the moment, four people were wounded in the strikes on Gaza. Israel’s military said a headquarters of the militant group Hamas was among the targets.

Hamas, which dominates Gaza, insisted it was not behind the rocket fire.

Israeli media are citing an Israeli defence official as saying that the rockets may have been launched by mistake while doing maintenance works.

Meanwhile, air raid sirens sounded across Tel Aviv metropolitan area on Thursday night for the first time since a 2014 war between Israel and militants in Gaza.

An explosion was heard in the city centre. At first it was believed to have been from a rocket being shot down, but the Israel Defense Forces (IDF) said no rockets were intercepted and that it assumed they had landed in open areas.

ShaneyhaMarch 15, 2019
Read More
Scroll for more
Tap
US to file raps against Volkswagen over massive fraud
Protests arise in Algeria after poll delay
We use cookies to ensure that we give you the best experience on our website. If you continue to use this site we will assume that you are happy with it.OkPrivacy policy