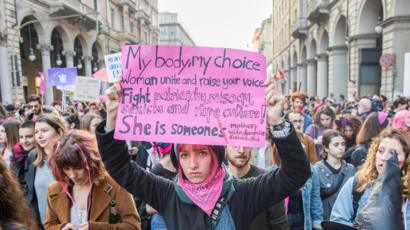 The right-wing League proposed chemical castration for some sex offenders, with their consent, as a condition for parole.

But the League’s coalition partners Five Star rejected the proposal.

Victims can suffer acute anxiety and depression when intimate photos of them are posted on the internet by ex-partners or hackers. The invasion of privacy can also harm them professionally.

The bill – known as Code Red (“Codice rosso”) – will come back to the Chamber of Deputies on Tuesday.

The session was suspended on Thursday when opposition MPs occupied government seats in protest, during a very heated debate.

“As you are an MP, perhaps what happened can serve as input to legislate and finally intervene against this phenomenon,” Giglio said.

“The topic is so sensitive that it requires wide debate not only in parliament, but also judicial and social, above all involving experts, victims, families, analysts, jurists and all the relevant state actors, like the post and telecoms police. It’s a very important issue, so serious regulation must not be incomplete,” Ms Sarti wrote.

John JosephMarch 30, 2019
Read More
Scroll for more
Tap
Thai’s elections vote count in, but no winner yet
Planned coup celebration in Brazil stopped by Judge
We use cookies to ensure that we give you the best experience on our website. If you continue to use this site we will assume that you are happy with it.OkPrivacy policy