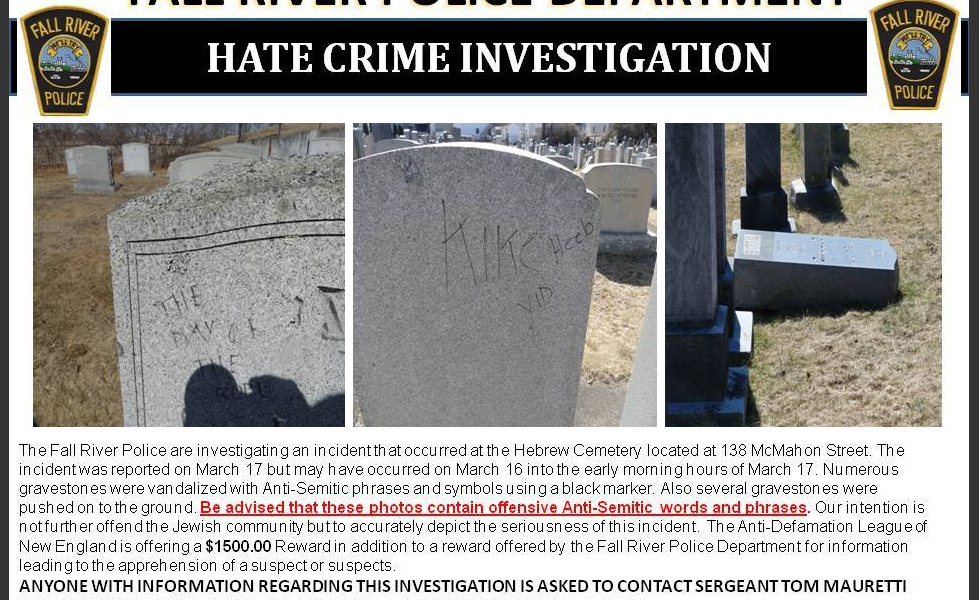 At least 30 gravestones were desecrated with swastikas and anti-Semitic messages at the Hebrew Cemetery in Fall River, Mass., over the weekend.

Local police say they launched a hate crime investigation after a cemetery maintenance worker discovered the vandalism, including headstones that were pushed over as well as headstones tagged with anti-Semitic phrases and symbols written in black marker.

Several headstones had the anti-Semitic slur “kike” written on them.

“The people responsible went out of their way to pick a Jewish cemetery and deface it with real vitriol, real hateful language,” said the Anti-Defamation League of New England’s regional director, Robert Trestan. “The language that they chose sent a message, not just to the families whose loved ones are there but to the entire Jewish community.”

At least two gravestones were defaced with the phrase “The Day of the Rope.” That phrase seemingly refers to a novel that imagines a violent race war that leads to the extermination of Jews and other minorities. The book, called the “bible of the racist right” by the FBI, has helped fuel extremist attacks like Timothy McVeigh’s Oklahoma City bombing.

The vandalism is part of an uptick in anti-Semitic acts in Massachusetts, from anti-Semitic fliers being distributed in communities to graffiti at middle and high schools and universities.

Trestan, who saw the vandalism in person on Tuesday (March 19), said this incident felt particularly serious.

“This one is a couple notches up, because looks like a targeted attack,” Trestan told Religion News Service in a phone interview. “When you write ‘Hitler was right’ and ‘heil Hitler’ and dozens of swastikas, you’re sending a particular message of disruption to the Jewish people.”

Alongside rewards from the local police and Fall River’s Temple Beth El, the ADL has offered a $1,500 reward for any information leading to an arrest in the case.

“Though racists, bigots and anti-Semites have been greatly emboldened in recent years, I believe their actions have alerted the larger public that something needs to be done to combat this kind of hatred in our country,” Elber said.

According to the Jewish Cemetery Association of Massachusetts, the Hebrew Cemetery was established in the late 1800s, making it one of the area’s oldest Jewish cemeteries. It is one of three Jewish cemeteries in Fall River and one of 222 in the state.

ShaneyhaMarch 24, 2019
Read More
Scroll for more
Tap
Most US Christians find Trump signing Bibles inappropriate
Taking stock of the clergy sexual abuse crisis: Protecting children
We use cookies to ensure that we give you the best experience on our website. If you continue to use this site we will assume that you are happy with it.OkPrivacy policy