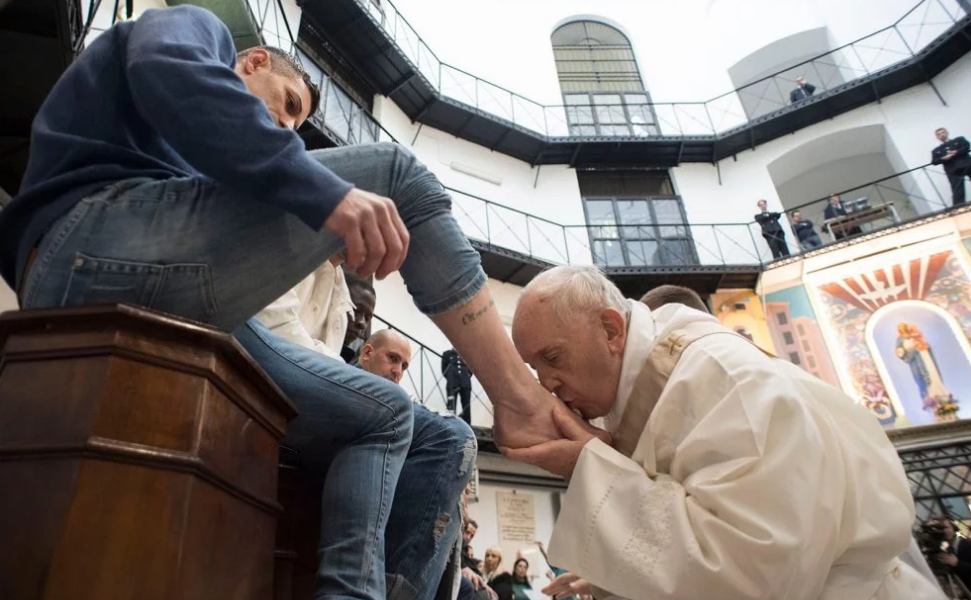 Pope Francis washes the feet of inmates during his visit to the Regina Coeli detention center in Rome, where he celebrated the “Missa in Coena Domini.” (Vatican Media via AP)
Making ourselves a ‘pontifex’ in the mode of Pope Francis

I hate the term “the other,” which sounds alienating, but I admit that it serves a purpose, particularly in describing how Pope Francis has changed the world. From the beginning of his papacy, Pope Francis has gone out of his way to reach out to “the other.” He has gone beyond his own tribe. He is a Catholic who is a global citizen, valuing all the citizens of this world – even the ones he would disagree with.

At Easter last year, Francis visited a prison in Italy and washed the feet of two Muslims, an Orthodox Christian, and a Buddhist. His tone toward the LBGTQ community has been one of understanding, not necessarily endorsing its members’ choices but definitely pushing back against the haters.

He’s made it clear this year especially that all of us should be building bridges, not walls — as befits someone who bears the traditional title of “Pontifex”: Latin for “bridge builder.”

It’s a good job description. He wears two hats, really — that of a head of state of the Vatican City and of the spiritual leader of Catholics around the world — and as such he bridges the world and the church.

t February’s Conference on Human Fraternity in Abu Dhabi, I watched him, as Vatican head of state, sign documents of cooperation between the Catholic Church and Al-Azhar University in Cairo, and pledges of interfaith cooperation with the grand imam of Al-Azhar, Ahmed el-Tayeb.

The next day Francis put on his spiritual-leader hat to lead the first papal Mass ever in that part of the world.

Nikki and I were waiting nervously in a side room when a man shuffled in, closing the door behind him, and stuck out his hand. It was the pope — no fanfare, no warning, just him.

He was warm, gentle, unassuming and very engaging. We both introduced ourselves. I shared how I was raised in a very conservative Southern Baptist pastor’s home, but had a grandmother who was Catholic and sometimes there would be “discussions.” Francis began to laugh and said, “I’ll bet there were!”

Nikki talked about her work in Vietnam the past 15 years teaching special education to parents and educators, and the pope listened with interest.

He and I then talked about our joint work in building bridges and trying to be peacemakers. As someone who has worked with Muslims trying to build bridges for nearly 20 years, I thanked him for his work; his first response was, “I am heartbroken over what happened in New Zealand.”

We talked further about the work of building bridges, the importance of reaching out and how we might go forward.

In reflecting on Francis’ experience and mine, I’ve seen a few things about bridge building and peacemaking hold true for both of us.

First, the people who give you the hardest time for loving the other are not the other but generally come from your own tribe. They live by fear of loss — of life, power, position, many things.

Second, it’s rare that people reject overtures of peacemaking from people of the other tribe. At a minimum they want to hear what you have to say. I don’t know how many times I’ve been told, “Bob, you are not like other Christians. You’re more open.”

The truth is, I am like many other Christians: I’m just the only one they know, and I know them not because I waited for them but because I reached out to them first.

Third, culture has to be challenged. We live in a very uncivil time and tone. Hate and hate speech, calling people names and getting in a huff only polarizes people. It does nothing to bring peace and resolution. Jesus didn’t change people by calling them idiots or other names.

Fourth, peacemakers conquer not with hate but with truth and endurance. They are unassuming, kind and gentle. They are in the same current as their contemporaries and colleagues, but they move up the ladder not through power and force but through humility and love, just like Pope Francis.

Obviously I don’t agree with Francis on everything. I’m a Protestant, and a Baptist. (I’d love to baptize him properly!) But, I sure do agree with his love of God and his love of people and his willingness to put himself on the line for the sake of others.

Angry, mad, vengeful, greedy people don’t age well with history. History is the story not merely of men who “conquered” the world, but who “transformed” the world, through the thoughtful power of faith, hope and love. We know their names: Augustine, Francis, Tolstoy, Gandhi, Martin Luther King Jr., Mother Teresa and Pope Francis.

Toward the end of our meeting Francis asked me to pray for him, as I have heard he does with everyone. Nonetheless, it was very humbling. He told me his job was very challenging and he needed prayer.

So I put my arm around Francis and prayed for him — for strength, courage — but, most of all, that God would use him to be a bridge builder and a peacemaker. I asked God, “Father, your word for me the past two years has been ‘peace.’ I ask you, let this pope be known as the Pope of Peace, in the name of Jesus, amen.”

This morning I prayed for myself, “Jesus make me a man of peace, a peacemaker. I’ve got a long way to go. Calm down the Texan in me. Tone down the Baptist in me. Turn up love, mercy, kindness, gentleness, humility, so that I’ll be a bridge builder and peacemaker.”

ShaneyhaMarch 23, 2019
Read More
Scroll for more
Tap
Muslim inmates sue over combined faith services in Arkansas prisons
Prayer postcards spark debate over faith and privacy in Nashville
We use cookies to ensure that we give you the best experience on our website. If you continue to use this site we will assume that you are happy with it.OkPrivacy policy