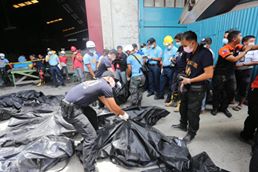 PNP Officer-in-Charge, Police Deputy Director General Leonardo A Espina, ordered the fielding of more Scene Of the Crime Operations (SOCO) forensic examiners to assist the Bureau of Fire Protection (BFP) in retrieval operations of bodies of victims who perished in Wednesday’s fire at a factory in Valenzuela City.

Espina said the SOCO Teams from NCRPO and National Headquarters will also assist in identification of bodies and processing of the crime scene in coordination with BFP.

At present, there are now 40 PNP SOCO personnel at the scene. The Valenzuela City Police Station has also deployed more police personnel in the area to prevent looting and preserve evidence at the crime scene.

Espina said the NCRPO has taken proactive moves in coordination with the city government of Valenzuela to prevent the incident from escalating into a crisis situation as a result of the mass casualties and indirect effects on affected families and residents.