The “intentional” road rage in New York has drawn comments and reactions over the internet, the NYC police revealed now that the driver wanted to kill all the victims and the latter was looking for a suicide-by-cop.

According to New York Polive Department, the driver that killed 1 & injured 22, was apparently high on synthetic marijuana K-2.

Also, the Post reported that the suspect was out for blood, and looking for a suicide-by-cop.

It can be remembered that the Bronx man plowed and drove his car into a Times Square crowd, killing a teen tourist and injuring 22 others, wanted to commit murder and then wanted cops to kill him, police sources said.

“You were supposed to shoot me! I wanted to kill them,” Richard Rojas, 26, told police, according to sources cited by the Post.

The police information said the killer was also been arrested twice for DWI, wasn’t drunk when he went on the rampage in the heart of the Big Apple, a high-ranking police official said.

As of now, Rojas is currently being tested for drugs, as he appeared to be high, according to sources.

The sources also noted that the road rage suspect was served in the US Navy from 2011 to 2015, and was not honorably discharged.

Speaking on the personal life of the suspect, a friend said Rojas was never the same after he returned from his military service, and took up drinking to cope with the stress.

“He finally came home, and it was hard for him to find a job,” said Harrison Ramos, 30. “He was having a lot of bad nightmares. He was talking crazy. He was acting strange,” he added.

Supect’s also added that Rojas would buy alcohol “to forget about all that stuff.”

“He should’ve gotten professional help,” he said. “He would talk about demons and devils and conspiracy theories.”

“There is no indication that this was an act of terror,” he said.

Separately, the NYPD says that the 26 yr old driver, identified as Richard Rojas from the Bronx, was traveling South on 7 Av made u-turn onto West sidewalk. Went 3 blocks on sidewalk before hitting pillar.

In a separate incident, Breaking911 reported that 5 People were just struck by vehicle, 1 dead-on-arrival, 3 likely to die / very critical on Broadway & Castleton Ave. It is unclear if the two incidents are linked.

The crash happened at Broadway and West 45th Street at about 12 p.m., officials said. FDNY said 13 patients were being treated at the scene. 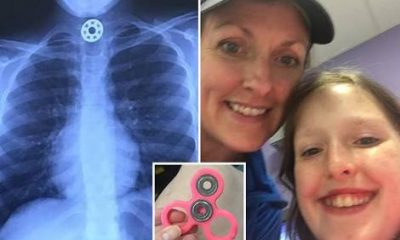 johnMay 18, 2017
Read More
Scroll for more
Tap
Texas girl needs surgery after swallowing “dangerous” fidget spinner part
PH’s Duterte renames Benham Rise to Philippine Rise
We use cookies to ensure that we give you the best experience on our website. If you continue to use this site we will assume that you are happy with it.OkPrivacy policy