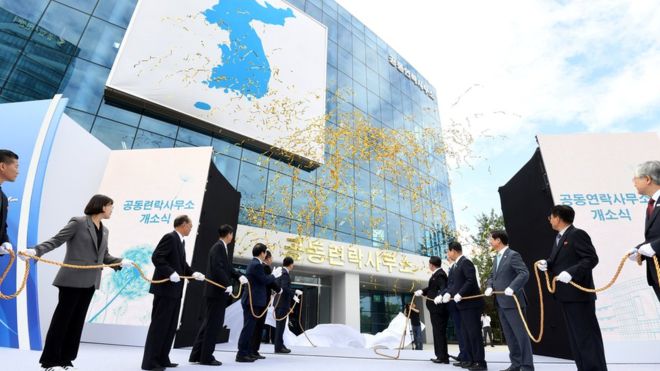 North Korea has withdrawn from the inter-Korean liaison office which was inaugurated amid a warming of ties last year to facilitate talks with the South.

Seoul said it was contacted and informed that the North’s staff would be leaving later in the day.

The South Korea has expressed its regret at the decision and is urging staff from the North to return as soon as possible.

The two Koreas have not met since a failed summit last month between the US and North Korean leaders.

The liaison office, located in the North Korean border city of Kaesong, had allowed officials from North and South Korea to communicate on a regular basis for the first time since the Korean War.

It is meant to be staffed by up to 20 people from each side.

Meanwhile, South Korean President Moon Jae-in had hoped his diplomatic relationship with North Korean leader Kim Jong-un had progressed far enough to withstand any issues between the North and the US.

With what the things go round now, it appears that Pyongyang did not feel the same.

Seoul had hoped to act as an intermediary between President Trump and NoKor’s Kim.

The fact that Pyongyang is not even willing to have staff in the same office as South Korea right now does not bode well, our correspondent says.

It can be recalled that since last month’s failed summit in Vietnam between the US and North Korean leaders, Pyongyang has warned that it could resume missile and nuclear testing.

Earlier this month, Vice Foreign Minister Choe Son-hui said that Washington threw away “a golden opportunity” at the summit.

ShaneyhaMarch 15, 2019
Read More
Scroll for more
Tap
Chemical blast in China jumps death toll to 47
NZ Prime Minister Ardern leads national day of mourning for Christchurch shootings
We use cookies to ensure that we give you the best experience on our website. If you continue to use this site we will assume that you are happy with it.OkPrivacy policy