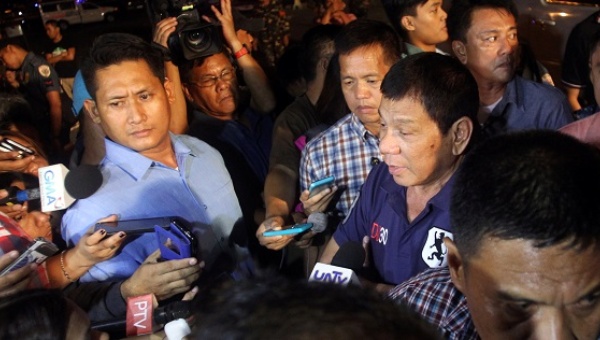 President Rodrigo R. Duterte declared a “state of lawless violence” in the country, early morning of September 3, just a few hours after an explosion happened late Friday evening that killed more than 12 people and scores injured more than 60 others at a night market in Davao City.

The statement occurs with the members of the press after his command conference held earlier with local police at the Davao City Police Office, followed with a meeting including police, military and some cabinet officials at Marco Polo Davao which was near the blast site.

“I am suggesting that you be liberal enough to understand us because we are trying to cope up the crisis now. There is a crisis in this country involving drugs, extra judicial killings, and there seems to be the environment of lawlessness or lawless violence in this country. State of lawlessness stay until such time that I would say that it is already safe,” said President Duterte.

Duterte himself clarified saying that it is not a declaration of “Martial Law”.

“It’s a state of lawlessness not Martial Law, until there is a threat against the people and against the nation. Lawlessness is any action of impunity or any action taken by the security forces would be in furtherance to stop terrorism. I am including drugs,” he said.

Duterte clearly stated that Armed Forces of the Philippines (AFP) and Philippine National Police (PNP) will “run the country in accordance with his specifications.”

“I have this duty to protect this country and I have this duty to keep intact (the) integrity of our nation… it is not Martial Law and has nothing to do the suspension of the writ of habeas corpus. We go about, but I said there will be checkpoints and I believe they are allowed to do that under such circumstances,” he added.

President Duterte even stated that Davao City will be locked down and will conduct massive checkpoints, adding that the Davao explosion is not an isolated case, where the government is expecting similar incidents in other areas of the country, Sun Star reports.

“These are extraordinary times and I suppose I am allowed to authorize security forces to do searches,” he said.

US, Japan vows to escalate pressure after North Korea fires missile over Tokyo

johnApril 27, 2017
Read More
Scroll for more
Tap
Actual Footage Davao City Bombing at Roxas Night Market
Tsunami brought destruction in Busan
We use cookies to ensure that we give you the best experience on our website. If you continue to use this site we will assume that you are happy with it.OkPrivacy policy