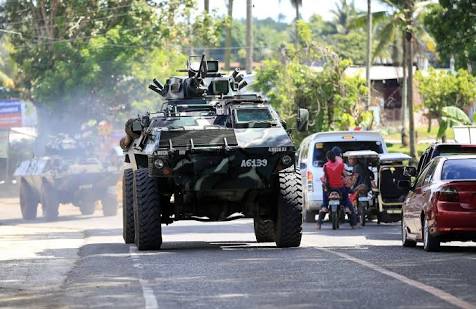 The Philippine government has issued an intensive attack to neutralized alleged ISIS group who waged threat and fear of terrorism in southern part of the country.

Due to the attack in the city of Marawi, President Rodrigo Duterte has put the entire Mindanao under Martial Law to combat the group who continues to shelter and hold some part of the city for over two weeks now.

In the said video, the unknown men can be seen tearing up pictures of the Pope and smashing statues. They finish off the rampage by torching the church building.

According to The Mirror, the footage was published by ISIS’s Amaq News Agency.

On Saturday, President Duterte has promised to have the situation fixed by the middle of the week.

As of now, local authorities still verifying thd video if it happened in the said city.

US hits ISIS with “mother of all bombs” in Afghanistan

johnApril 14, 2017
Read More
Scroll for more
Tap
China homes the world’s largest floating solar power plant
Japan approves law allowing emperor to abdicate
We use cookies to ensure that we give you the best experience on our website. If you continue to use this site we will assume that you are happy with it.OkPrivacy policy