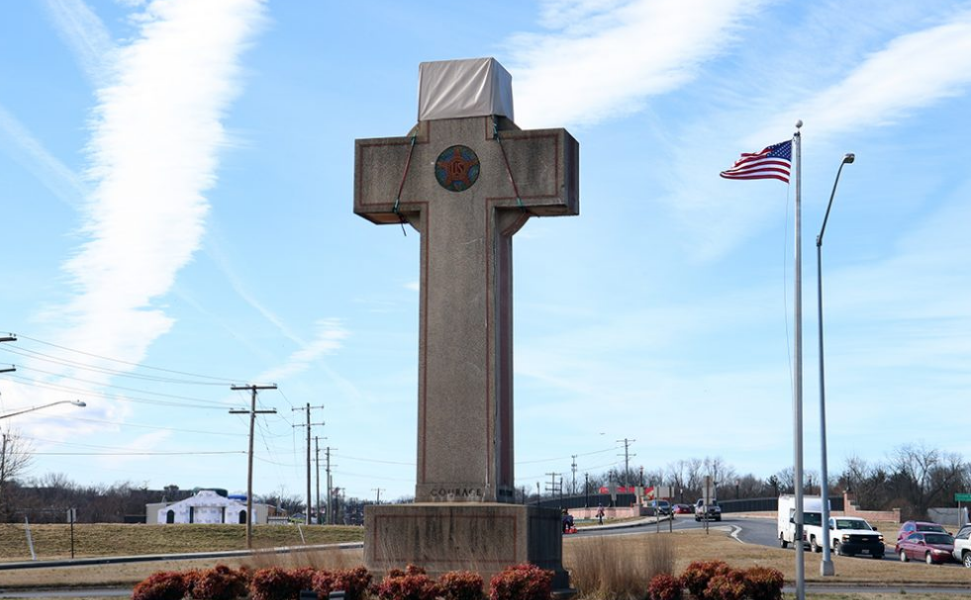 The 40-foot Peace Cross stands at an intersection in Bladensburg, Md., northeast of Washington. RNS photo by Adelle M. Banks
The Bladensburg Cross is no secular symbol

For the first time in history, the Supreme Court will hear arguments in a case asking whether the government can maintain a cross on government property. The justices will consider the government’s claim that a massive 40-foot Latin cross, maintained in the center of a major intersection, is simply a secular monument.

That claim, of course, not only defies common sense, it is offensive to many who take religion seriously. In a joint brief on behalf of Jews and Christians from a variety of denominations, we ask the court to reject this absurd claim.

Our agreement does not indicate a shared veneration of the cross. While we value interfaith dialogue and work toward the common good, we have not abandoned our specific religions for universalism. We respect religious differences and expect the government to do so as well.

Despite our theological differences and experiences (or perhaps because of them), we expect government neutrality between religious teachings. We see danger in any political hijacking of religion.

The cross symbolizes God’s promise of everlasting life – the most prominent teaching of Christianity – offered through the life, death on a cross and resurrection of Jesus Christ. This story is a powerful one. It inspires Christian evangelism in various forms. It is not taught in Judaism, nor in other religions, and the government should take no position on it. The government’s sponsorship of the cross sends a message of favoritism to Christians and exclusion to non-Christians.

Claiming the Latin cross is merely a “cross-shaped” memorial generically honoring all war dead doesn’t fix the problem. In fact, it makes it worse. The cross is used to honor the dead because it evokes Christian teachings about eternal life. To apply such teachings to veterans who did not choose it violates the fundamental aspect of religious liberty.

The court should uphold the First Amendment principle that government must avoid taking positions on religious truth or giving preference to one religion over another. It should reject the patently false argument of the government and its supporters in this case that the cross is nothing more than a benign and universal symbol for sacrifice.

Like other religion cases, this dispute will invite arguments about how best to define the relationship between religion and government. Some will claim – wrongly – that our position somehow amounts to hostility toward religion. Nothing could be further from the truth. Religion is fundamental to who we are, and our religious differences should be respected. The separation of religion and government protects our religious liberty. The government’s offensive arguments obfuscating the meaning of the cross in this case prove our point.

A ruling against the government in this case does not mean crosses cannot be displayed on any government property. Religious messages in government-owned cemeteries that reflect the identity and beliefs of the individuals buried there are plainly constitutional. Crosses on individual gravestones are not implicated by this case. There are many ways our government does and should honor veterans without damage to religious liberty.

Religious voices must continue to advocate for the separation of church and state. We know that religious communities benefit from the government’s fundamental obligation to avoid taking positions on purely religious matters. The First Amendment protects religious diversity and promotes peace despite our differences. The court should reject government actions that divide citizens according to religion, including any attempt to secularize sacred symbols under the false pretense of honoring veterans.

ShaneyhaMarch 23, 2019
Read More
Scroll for more
Tap
Prayer postcards spark debate over faith and privacy in Nashville
Most Americans continue to oppose religious service refusals to LGBT people
We use cookies to ensure that we give you the best experience on our website. If you continue to use this site we will assume that you are happy with it.OkPrivacy policy