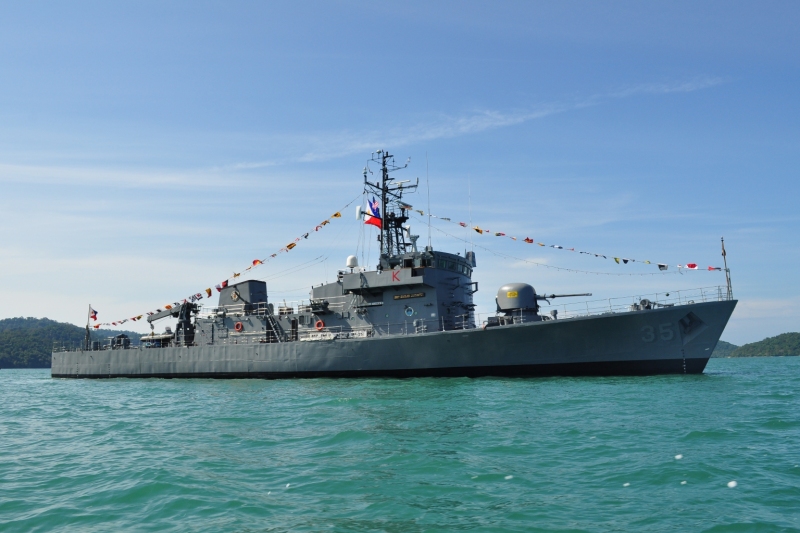 The Three Modern Warship of the Philippines aside GDP Frigates
JP

The Philippine navy has  only one fleet, the Philippine Fleet. As a type command, the fleet has seven major units

and The Three Modern Warship of the Philippines aside from Del Pilar Class is the Jacinto class Corvette  The ships formerly served in the Royal Navy‘s Hong Kong Squadron until 1997.

The Oto melara 76mm Compact DP (Dual Purpose) gun is the primary weapon and is mounted in a turret forward of the bridge. It has a range of up to 10 nautical miles (20 km) and can be used against ships, aircraft or ground targets. It is remotely controlled from within the Combat Information Center by the gunnery officer and has no crew within the turret itself. The gun can fire 80 Rounds in 60 seconds from its ready magazine, and the ships can carry a total of 450 rounds.

The secondary weapon (located at the stern) is a M242 Bushmaster 25 mm cannon in an MSI Defense System Seahawk A1 mount. This weapon is integrated with the 76 mm primary weapon via an Ultra Electronics Command and Control System and a Radamec 1500 Series 2500 Electro-Optical Tracking/Fire Control System. This new system was installed as part of Phase 1 of the Philippine Navy JCPV upgrade program. The Radamec 1500 Series 2500 replaced the older GSA7 Sea Archer Mk 1 electro-optical director with a GEC V3800 thermal imager added in 1987